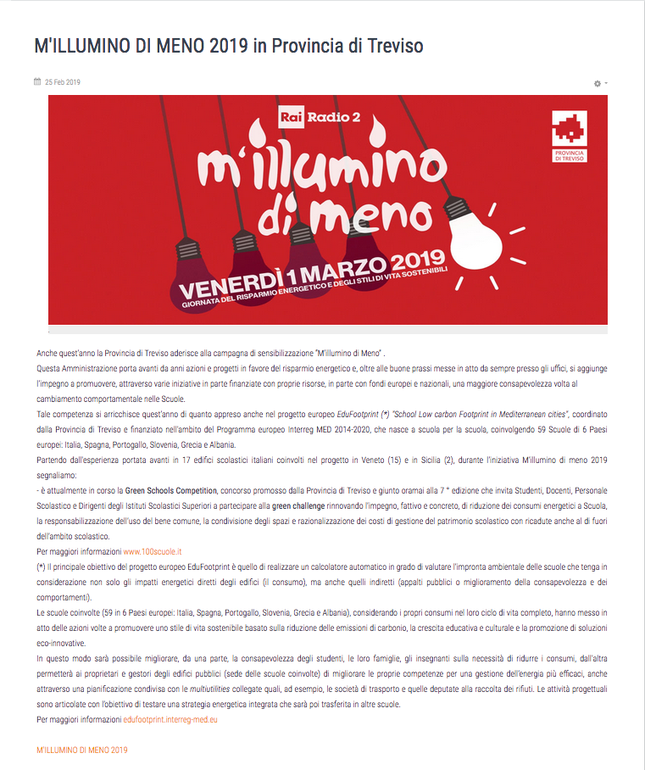 Also this year the Province of Treviso joins the "M'illumino di Meno" awareness campaign. The Provincial Administration has been carrying out actions and projects in favor of energy saving for years and, in addition to the good practices implemented in the offices, there is also the commitment to promote, through different initiatives partly financed with its own resources, partly with European and national funds, greater awareness aimed at behavioral change in schools.

This competence is enriched this year by what has also been learned in the EduFootprint project (School Low Carbon Footprint in Mediterranean cities), led by Provincia di Treviso and co-financed with ERDF funds in the Interreg MED programme.

Starting from the experience carried out in 17 Italian school buildings involved in the project in Veneto (15) and in Sicily (2), during the M’illumino di Meno 2019 initiative we would like to highlight the the Green school competition currently underway. This is the 7th edition of this competition promoted by the Province of Treviso, which invites students, teachers, school staff and managers of High Schools to participate in the green challenge, reaffirming their commitment through concrete reductions in energy consumption in schools, the empowerment of the use of the common good, the sharing of space and the rationalization of the management costs of schools, with consequences also outside the school environment.

All news
Back to top